Another Year of MOTS and FOMO?

The past year was a stellar one for emerging markets equities: the MSCI EM gained a full 37% in USD terms in 2017, its best performance since 2009. In retrospect, it is not difficult to see why. While global politics were fraught with surprises, tensions and volatility, the economic stars aligned almost perfectly: the global economy operated above potential (with a leadership rotation from the US towards Europe and Japan), world trade continued to rise, inflation remained moderate, earnings growth was robust around the world and monetary policy of the leading central banks remained broadly accommodative. 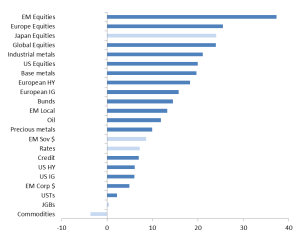 Markets enter the new year facing a series of challenges. Nevertheless, the consensus is for More Of The Same (MOTS). To some extent this will likely hold: for example, the IMF expects global growth to rise from an estimated 3.6% in 2017 to 3.7% in 2018 (from 3.2% in 2016). Even if growth disappoints and does not accelerate, it will likely remain above trend. For financial market participants this could further stoke their Fear Of Missing Out (FOMO). In 2017, portfolio inflows into EM rebounded and were on track for a net $285 bn, double the total of the previous two years. At the same time, market and liquidity risks have become elevated and medium term vulnerabilities have risen. Several factors suggest caution in chasing returns: 1) the outlook for US and DM policy, 2) recent financial market behaviour and 3) local EM election risk.

The monetary reversal in DM has now begun in earnest, with central banks either tapering asset purchases, reducing asset holdings and/or hiking rates. The US yield curve has flattened, possibly presaging recession, but a bigger concern is a potential rise in long term rates. Implementation of the US tax reform could produce a one-off boost to US growth of 0.3% points according to some estimates. There is a legitimate debate about the current stage and the longevity of the US business cycle and whether with growth at 3.2% saar in Q3 and unemployment at 4.1% such fiscal stimulus risks overheating the economy. This might spark inflation and precipitate the Federal Reserve into additional rate hikes. As it stands, markets expect the economy to accelerate from 2.3% growth to 2.6% in 2018, the US Core PCE to rise from the current 1.5% yoy closer to 2% in 2018, and the Fed to raise rates by 50-75bps. 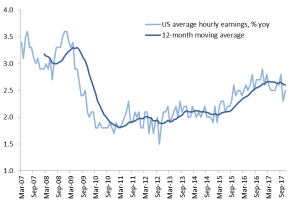 But while the US tax package will at most provide a short term boost to demand and wages, the likelihood of rising long term rates represents the bigger risk. Aside from shifts in investor sentiment prompted by exogenous causes, long term rates could be buffeted by two critical factors, each reinforcing the effect of the other. The Fed’s balance sheet is expected to shrink by approximately $415 bn in 2018 and more in later years before stabilizing and rising again, all else equal. While this has been well-telegraphed and markets appear ready to digest the gradual increase in additional supply, it is worth noting that this amounts to 60% and 77% of 2016 and 2017 net annual Treasury issuance respectively. In other words, the additional USTs reaching the market are as if the government increased its deficit from 5% of GDP to 8-9% of GDP and funded it entirely through debt. True, the ECB’s Eur360 bn worth of asset purchases and the BoJ’s unspecified amount of purchases (it has moved to YCC – yield curve targeting) will compensate for some of this impact at the global level.

But domestically, not all else is equal. The administration’s recently announced tax plan is largely unfunded (until mooted welfare spending cuts are implemented) and will create a $1.5 trn funding gap over the next 10 years, according to the non-partisan Congressional Budget Office (other estimates suggest a gap as high as $2.2 trn). Potential increases in infrastructure spending would further exacerbate the deficit. This adds a second important factor putting upward pressure on long term yields. What is more, the ECB too will likely seek to extricate itself from continued asset purchases in 2018 as the Eurozone economy powers on.

All told, these developments would not only be unwelcome for the US economy, but could also shift risk sentiment, affecting in particular emerging markets with large funding needs. What is more, any accompanying US dollar strengthening would further weigh on EM dollar returns.

Volatility has remained surprisingly subdued in 2017 despite the various risks that emerged throughout the year, be they electoral surprises in Europe, natural disasters in the US, the ructions in the Trump White House or the escalating war of words with North Korea. It is true that geopolitical events are rarely anticipated by financial market pricing. But financial markets (VIX readings) also failed to anticipate the Great Financial Crisis in 2007 and dwelled instead on the “Great Moderation”. 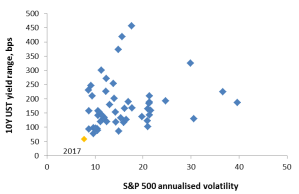 But the issue is that low volatility bestows a false sense of security. In fact, a prolonged spell of low volatility can ultimately make the financial system more vulnerable to crisis, not less – a phenomenon known as the “volatility paradox”. In a benign risk environment, when monetary policy is super-accommodative, investors are pushed into highly levered, ever riskier asset classes (outside their natural habitat), which mostly benefits the least creditworthy. Low realised volatility in turn encourages financial market participants to increase their positions as their risk management strategies suggest ever lower value-at-risk. And indeed, leverage is currently higher than before the crisis: global debt has increased by $60 trn since 2006, much of it taken on by the business sector as households have been in balance sheet repair mode in the wake of the 2008 crisis. External borrowing has sharply increased in emerging markets in general and in China’s shadow banking system in particular. The CME Group has produced an interesting chart relating yield curve shifts to volatility levels across cycles that suggests that we may be in the last stage of the current low volatility period (although the process doesn’t hold exactly across all cycles). 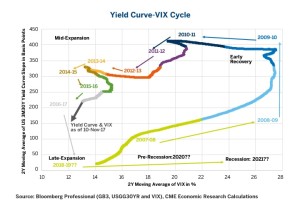 While the financial system today may be stronger than pre-GFC as systemically important banks and insurers have become more resilient thanks to increased capital and liquidity, investors may struggle to exit crowded trades once volatility increases. This could be set off by policy changes such as rising rates,  inflation or growth shocks, a high-profile default, a breakdown in trade relations or any geopolitical flare-up.

The year 2018 could be momentous for both Mexico and Brazil – two emerging markets bellwethers – and direction-defining for the asset class. Indeed, both countries face presidential elections this year, without a market-friendly candidate in serious contention at the moment. In Mexico, former presidential candidate and mayor of Mexico City Andrés Manuel López Obrador (AMLO) espouses a hard-left rhetoric and policies that would undo the reforms of the Peña Nie 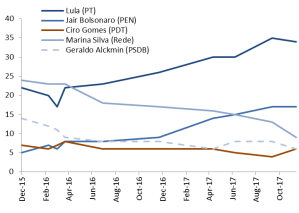 ta era, while Finance Minister Meade, the PRI candidate, garners little support at the polls for now. In Brazil, the frontrunner by far remains former President Lula, who has been convicted of corruption but is appealing his verdict. His policies (and those of his successor) have led to explosive fiscal spending and, eventually, recession. His main challenger, Jair Bolsonaro, is a far-right populist.

Broad political swings in emerging markets have in the past heralded important shifts in investor sentiment towards the asset class. The upcoming electoral season harbours material risks in that respect.

The still-benign fundamental environment continues to warrant exposure to risk assets, but with an eye towards greater discrimination and a rising allocation to cash as the outlook for the year ahead becomes decidedly more challenging. After a 30-year decline, a reversal of long term yields lies in store and while the timing may be uncertain, the direction of travel is clear. This will not just weigh on rates markets (which 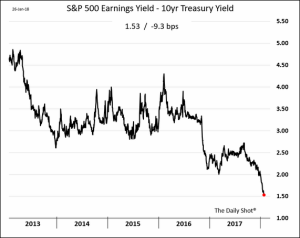 under-appreciate the risk of a pronounced rise), but in particular on stretched equity markets whose relative attractiveness is on the wane. Given the combination of low volatility and high leverage in the market, the adjustment to changing conditions risks being sharp.

Emerging markets with their additional idiosyncratic risks (systemically important elections) are at particular risk. However, should centrist alternatives emerge there and the risk of trade disruption in Mexico recede, they could also offer investment opportunities as valuations remain less stretched than in developed markets.

This entry was posted in Uncategorized and tagged EM, Emerging Markets, Equity, rates, US. Bookmark the permalink.