In its repeated attempts to combat Japan’s endemic deflation, the BoJ pioneered quantitative easing (QE) in the modern era, ventured into purchases of non-government assets early on and was one of the first central banks in the post-GFC era to experiment with negative interest rates. It has now expanded its arsenal further, to the point where its new targets represent a shift to a new policy regime, if implemented strictly.

The BoJ announcement contained two main elements: First, a commitment to aim to overshoot the 2% inflation target until core CPI exceeds the 2% level in a stable manner. This is reminiscent of the recent policy discussions at the Jackson Hole meetings over the appropriateness of the monetary framework in addressing the next recession (e.g. doubling the inflation target to lower the real interest rate). However, as described elsewhere, we regard this not only as ineffective when the current inflation target has not been met, but worse yet, as potentially damaging. 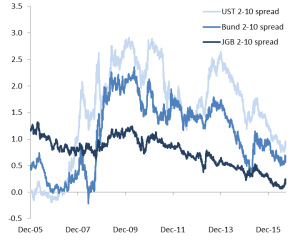 The second, more important element was the shift to the so-called yield curve control” regime. Here, the BoJ envisages targeting both short and long rates (the overnight rate on a part of bank balances, currently at -0.10% and the 10-year JGB yield, currently just below zero). The BoJ did not alter the size of its asset purchases of JPY80 trn per year or change its short term rate, but announced a yield target for 10yr JGBs of 0% (it also removed the guideline for a 7-10 year average maturity of its purchases to give itself more flexibility). The objective of the new regime ostensibly is to control not only the level, but also the slope of the yield curve with the aim of supporting banking sector profitability. The chart shows not only the long-running, secular flattening of the yield curve. but also how it compares to the German and US curves.

Despite these radical changes, markets took a dim view of the move (the yen rallied over 2% in its wake). This likely reflected one or more of the following issues:

In theory, the BoJ has given itself more policy tools – the long and the short term policy rate – and could act on either one at any given time. In reality though, it has revealed a preference for a yield curve spread of at least 10bps, so any move in one rate will condition a move in the other (under current circumstances). The upshot is that last week’s move which didn’t change the BoJ’s monetary stance, is likely nothing more than a precursor to more. The BoJ is set to ease further, but it is likely to cut long term rates by less than short term rates or leave them unchanged, thus maintaining or steepening the slope of the curve.

While it is possible that the current yield target can be reached with JPY80 trn of purchases or less per year, the BoJ will effectively have to cede control over the monetary base (and thus the size of its balance sheet). In turn, this implies that support for risky assets is weakened: on the one hand, quantitative easing has been curtailed, limiting the portfolio balance effect, and on the other hand, capping yields at 0% limits losses on government bonds and thus reduces the relative attractiveness of equities.

This entry was posted in Uncategorized and tagged BoJ, Japan, QE, rates. Bookmark the permalink.